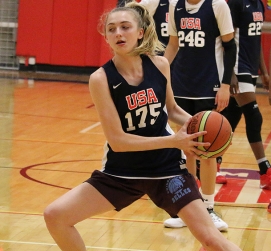 Jaylin Hartman, is a standout basketball prospect attending the Blair Academy in New Jersey. At 6-foot-2, with a versatile game, Hartman is the perfect example of a modern wing prospect with the innate ability to handle, shoot and pass the basketball at a high level. She is also very mature and goal orientated. ” I would like to win a National Championship and be prepared academically to be the CEO of my own company”.  Blair Academy is one of the top destinations in the country  for young ladies to challenge themselves on the basketball court and in the classroom where Hartman is an elite student-athlete studying literature, ethics, and history. Athletic bloodlines run deep in the Hartman family with uncle Jim Dray, who played football at Stanford, then went onto the NFL playing with several teams including the Arizona Cardinals, where he is now a coach. Dad, Todd Hartman, played college basketball at the College of New Jersey and has been a coach for 17 years. Jaylin Hartman’s advanced play has garnered heavy interest from division one schools, look for her to have a great sophomore season with a bright future ahead as collegiate recruit.